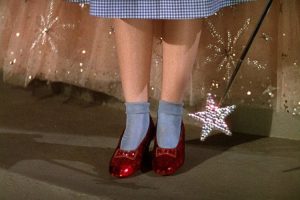 “You always had the power, my dear. You just had to learn it for yourself,” Glinda the Good Witch

Are there any more iconic shoes in film history than Dorothy’s ruby slippers?

Lovers of The Wizard of Oz (1939) movie surely cannot imagine Dorothy’s slippers being any color other than ruby red, but originally they weren’t. In the book, they are silver. The Silver Shoes are only mentioned in the original The Wizard of Oz (1900) book in the series and all Glinda tells Dorothy of them is “there is some charm connected with them; but what it is we never knew.” Of course, in the end we discover they can transport the wearer anywhere they wish and it is clear why the Wicked Witch of the West is obsessed with securing them for herself.

In keeping with the book, Dorothy’s shoes in the film were silver, but MGM chief Louis B. Mayer thought the Technicolor production would benefit from the slippers being colored. The shoes were re-designed with red sequins and felt-bottomed heels for more practical on-set use. The exception was the pair shown on the Wicked Witch of the East’s feet, which had different souls.

Another element of the shoe design came in the look of the Dorothy’s shoes. Designer Gilbert Adrian originally created a look for the shoes in a jewel-encrusted, curled-toe Arabian slipper style. This design was made to match the Wicked With of the East, but was altered to match Dorothy’s style more closely as the primary wearer in the film.

Despite the redesign, the ruby slippers were apparently not comfortable for Judy Garland’s feet. She reportedly only wore them for shots when they would be on camera.

While the segment is in black and white, we see that Miss Gulch is wearing the slippers during the tornado bike ride scene where Dorothy looks out her bedroom window and sees Miss Gulch transformed into presumably the Wicked Witch of the East. Supposedly, in better quality copies of the film the shoes appear to have a shimmer signaling they are the ruby slippers.

No one knows how many pairs of ruby slippers were actually created for the film as the studio records were long ago destroyed. Four pairs, five if the upturned toe Arabian style test shoes are counted, are known, including one pair on display in the Smithsonian and one pair planned for display in Academy of Motion Picture Arts & Sciences museum. A highly sought after collectible, one pair was stolen in 2005 from the Judy Garland Museum in Minnesota with a $1 million reward still outstanding for their return.