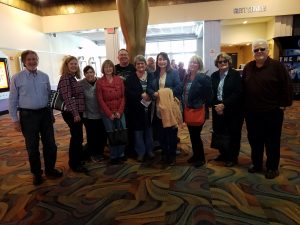 Most of us had not seen the movie in its entirety in a long time, and it was a special experience to see it, all three hours and thirty minutes of it, on the big screen. Many of us also expressed an intent to watch The Godfather to back-fill ourselves on the Corleone family story. We’ve learned that it’s often difficult to keep straight what happened in an original film versus what happened in the sequel. We will surely compare notes on the two films at our next get together.

One thought on “TCMC Outing: The Godfather Part II”