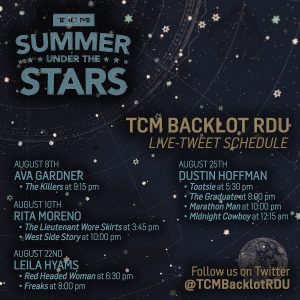 The Raleigh/Cary TCM Backlot Chapter is having a banner month in August! Several chapter members are live-tweeting during TCM’s Summer Under the Stars programming from our Chapter Twitter account: @TCMBacklotRDU.

Just last night, Chapter member Lora, live-tweeted during The Killers as part of TCM’s programming in tribute to Ava Gardner. Many TCM fans and TMC itself took notice, liking and engaging with the content. The staff at the Ava Gardner Museum in Smithfield, NC also shared a lot of content about Ava Gardner from their archives in a fabulous complement to our efforts. In all, it was a banner activity for the Chapter as we engaged fellow TCM fans.

Tomorrow, Saturday, August 10, Chapter member Kim takes the reigns to live-tweet The Lieutenant Wore Skirts at 3:45 pm and West Side Story at 10 pm during the programming dedicated to Rita Moreno.

On Thursday, August 22 for Leila Hyams day, I’ll be at the live-tweeting helm for Red Headed Woman at 6:30 pm and Chapter member Linda will take over at 8 pm for Freaks.

Chapter member Lexi is on deck for Dustin Hoffman on Sunday, August 25. She’ll live-tweet Tootsie, The Graduate, Marathon Man, and Midnight Cowboy in a straight run from 5:30 pm-12:15 am. Now, that’s a movie marathon!

Hope classic film folks will continue to join us and enjoy our Chapter’s insights on these stars and films in the TCM Summer Under the Stars lineup!