A Walk in the Sun (1945) is part of the February 2019 lineup on The Film Detective. For me, it’s a new classic movie discovery. 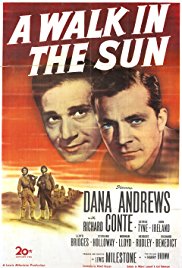 A Walk in the Sun Movie Poster

The film begins in 1943 on a landing barge, with a group of infantry soldiers from Lee Platoon of the Texas Division awaiting their upcoming landing on a beach near Salerno, Italy. As their anxiety builds, we get a preview of what this film is really about—regular soldiers who obey orders and do their jobs no matter the conditions and unknowns. It’s on this barge that we learn the platoon’s motto of “Nobody Dies,” a refrain echoed in the film.

Soon after their landing the platoon finds itself without its two most senior officers. Their next in command reluctantly takes over and the men piece together what their mission is from a map found in the bag of their former commanding officer.

The platoon’s mission lies ahead in a six-mile walk to their target, which is to overtake an occupied farmhouse and destroy a bridge that lies just beyond. They set out in three squads led by Sgt. Eddie Porter played by Herbert Rudley, Sgt. Bill Tyne, played by Dana Andrews, and Sgt. Ward, played by Lloyd Bridges.

This Italian countryside walk in the sun by the platoon gives us a unique view of war and the war fighter. The film is about the spaces in between—the lulls in the fighting—where the men have only their own thoughts and each other to keep them going. 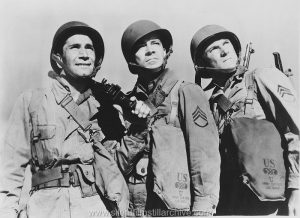 Along the walk we get to know them through their conversations with one another. We witness the banter between machine gunner Pvt. Rivera played by Richard Conte and Pvt. Jake Friedman played by George Tyne as his sidekick. We come to know Pvt. Archimbeau played by Norman Lloyd, who consistently takes on the role of lead scout stating, “Every dirty job in the army is my personal property.”

The platoon is attacked by enemy aircraft and we follow them into a roadside ditch where they face the tough decision to carry on, leaving their wounded behind. Through their conversations, we begin to see who among the leaders can make the tough decisions and who is starting to buckle under the pressure of leading.

This reaches a crescendo when Sgt. Porter succumbs to the pressure and has a breakdown. Here we witness compassion and empathy in a truly touching scene about the realities of shell shock in battle.

In yet another change in leadership for the platoon, they carry on with their mission following Sgt. Tyne to the farmhouse. Here again we see squad leaders coming together to formulate their plan of attack and individual heroism playing out.

The platoon does carry out its mission. But they are not successful in living their motto, “Nobody Dies.”

This movie highlights how soldiers face the unknown. Whether it’s what is happening on the beachhead behind them or what lies in wait at a target ahead of them, they carry on without visibility. It’s about the sights unseen in war, a point driven home when our platoon loses its binoculars and therefore ability to see further ahead.

The film is reminiscent of the Peter Brueger the Elder painting, The Blind Leading the Blind in which men with different visual impairments lead one another into a ditch. Each of the soldiers has vulnerabilities that must be addressed along the walk to ensure their mission is complete.

Some final thoughts. Don’t be put off by the opening credits—a sequence that starts with a man’s hand pulling a book off a shelf and a narrator introducing the cast within the book’s pages. That, coupled with using a song sung in the style of a spiritual, are detracting elements. It’s worth staying the course to watch this very unique WWII movie centered not on great battles but on the small wins made possible when soldiers do their duty.

Note: The movie is also known as Salerno Beachhead.

← My Trip Over the Rainbow Tidbits: My Fair Lady →