Each year, the changing of the seasons is signaled by the airing of the seasonal television specials. Since the 1960s, the arrival of the Christmas season means it’s time to watch the Rankin/Bass animated films: The Little Drummer Boy (1968), Frosty the Snowman (1969), Santa Claus is Coming to Town (1970), and The Year Without a Santa Claus (1974).

Known for their doll-like characters and powdery “Animagic” snowfall, Rankin/Bass Productions produced some of the most beloved seasonal television specials in the 1960s-1970s, including Rudolph the Red-Nosed Reindeer (1964) the longest-running television Christmas special to date. It and their other stop-motion animated features have become must-watch viewing at the holidays. Generations remain enthralled by these Christmas specials, making them a tradition year after year.

The annual Christmas specials depict traditional holiday stories and feature iconic characters like Jack Frost, Old Man Winter, Santa Claus, elves, toy-makers, and shepherds. Beloved as they are, they beg the question of anyone loving the history of film, what about the generations before?

Before the televised specials we know today, there were animated shorts. As one might expect, seasonal stories were popular with audiences and most early studios produced Christmas stories. They are worth viewing today, if only to discover what one’s great-grandparents may have seen.

This December consider a visit to Christmas past. The seasonal shorts from The Film Detective can take you there. 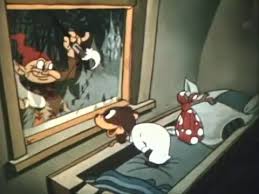 Jack Frost (1934) is an eight-minute animated short featuring a baby grizzly bear and his encounter with Jack Frost. Despite Jack Frost’s warnings that winter is coming, the defiant little cub does not want to hibernate. Disobeying his mother, he runs away from home. Alone in the woods, he encounters Old Man Winter who traps him in an icy storm. Jack Frost rescues the cub and returns him home to his bed. The cub has learned the lesson to respect nature and obey his parents.

Christmas Comes But Once a Year (1936) is an eight-minute animated feature from Fleischer Studios, a premier producer of animated cartoons for theaters in the 1930s. Their iconic characters included Koko the Clown, Betty Boop, Bimbo, Popeye the Sailor, and Superman. Set in an orphanage, Christmas Comes but Once a Year opens on Christmas morning with the orphans waking up to grab their toys from their stockings. One by one the toys break sending the orphans back to bed crying. Enter Professor Grampy, an animated cartoon character from the Betty Boop series, making his only solo appearance in a cartoon. Wanting to save Christmas for the orphans, Grampy makes them new toys out of household appliances, furniture, and kitchen items—anything he can find. He dresses up as Santa and distributes the toys to the orphans who join in a celebration happily singing Christmas Comes but Once a Year.

Christmas Toyshop (1945) is a 10-minute black-and-white short beginning as a live-action film of a family sending the children off to bed on Christmas Eve. While the kids are sleeping, mom and dad set up the tree and gifts. The Sandman sends the children off to sleep, but they are awakened by Santa crashing down the chimney. Santa lulls them back to sleep by telling them the story of what happens in a toy-maker’s toy shop when he goes home for the night. The film switches to a cartoon where the toys come to life performing a vaudeville act and fighting off an attack from a spider. After the toys are victorious, the children wake up and the live action returns to the family enjoying Christmas morning. Christmas Toyshop is a prime example of 1940s short film-making with the cartoon segment clearly an earlier vintage as film distributor Official Films was known to buy and reissue older films, combining them with newer footage. 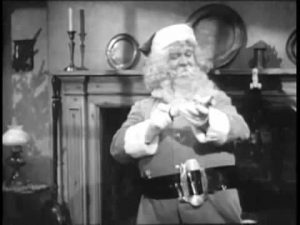 The Elf and Mr. Little (1953) features marionettes in a story 13 minutes long about Mr. Little a grumpy old toy-maker who has lost his Christmas spirit feeling the pressure to make toys during the season. The toy-maker makes a deal with an elf to help him make toys at Christmastime in exchange for letting the elf have anything in the shop that he wants when his work is done. Throughout the season the elf works away while each night a little girl accompanying a group of carolers peers at a doll in the shop window. Once the elf completes his work, he asks Mr. Little for the doll in the window. Curious to know what the elf wanted with the doll, Mr. Little follows him to a church where the elf presents the doll to the little girl. After witnessing the selfless exchange, Mr. Little’s heart is changed, and his Christmas spirit is returned. An unusual production, The Elf and Mr. Little was filmed in the Boys Club of Phoenix using a boys choir to sing the songs of the marionette choir. Some releases show it in black-and-white, others with a blue tint. 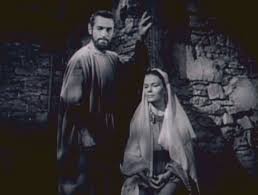 The Little Lamb (1955) is a nine-minute black-and-white live-action film sharing the story of the Nativity. It focuses on a little lamb who, by wandering off into the wilderness, leads two shepherds to receive a message from an angel. The angel tells them to visit Bethlehem where a savior has been born. They set out with their third companion shepherd taking the little lamb with them. They arrive in Bethlehem to find Joseph and Mary with the newborn baby Jesus in his manger. The baby is cold, and the shepherds place the little lamb beside the child to keep him warm. Realizing the significance of the birth, the shepherds kneel and pray while Mary watches over them. All the actors in the film are uncredited, but famed actress Maureen O’Sullivan, perhaps best known for appearing in Tarzan films in the 1930s, plays Mother Mary in this simple Nativity story.

One thought on “Grab Your Hot Cocoa: The Holiday Specials Are On”