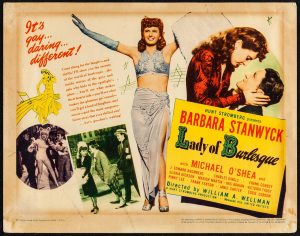 Lady of Burlesque (1943) is based on The G-String Murders a 1941 detective novel written by famous burlesque performer Gypsy Rose Lee. The film, directed by William A. Wellman and starring Barbara Stanwyck and Michael O’Shea, is a faithful and fun-to-watch adaptation of the novel.

It’s the story of Dixie Daisy the hot up-and-coming star of a new burlesque show at a former opera house. While Dixie chases her fame and fortune as a marquee performer, she comes up against competition for the headliner spot in the form of two determined rivals. When one rival is murdered, the whole company comes under suspicion. When her second adversary is killed, Dixie herself becomes a prime suspect. Determined to vindicate herself, Dixie sets out to trap the real killer.

A surprisingly engaging film, Lady of Burlesque is a comedy posing as a murder mystery. Promotional posters for Lady of Burlesque capitalized on its uniqueness with copy like “Girls & Gags! Music & Mirth! Mystery and Murder!” As promised, the film delivers all of it.

Strong on-stage performances of the characters in the burlesque show deliver the comedy and entertainment. Stanwyck as Dixie is stunning as she sings, dances, and performs a variety of numbers. Michael O’Shea as her prospective love interest is a convincing comic as a former vaudeville comedian before acting in movies. Their characters play well off one another, both on and off the stage.

Backstage, where the murder mystery plays out, delivers the drama. Glimpses into the dressing room highlight competition among the women not only for the headliner spot but for men. Budding romances and secret liaisons come to light, adding intrigue when not one, but two murders occur. Everyone’s a suspect as local police try to solve who murdered two female performers leaving a signature of wrapping their G-strings around their necks.

The film gives audiences a peek into the behind-the-scenes world of burlesque. In the 1930s and 1940s, burlesque was ever-present in cabarets and clubs across America. Part music hall, part performance art, and part adult entertainment, most popular burlesque shows featured singers, comedians, dancing girls and striptease acts. Fear of police raids was a reality for burlesque shows. Performers were often arrested and struggled to make a living.

Lady of Burlesque takes viewers backstage, focusing on the business of running a show and the challenges facing performers within it. The film’s show teeters on the edge of closure under threat of raids and struggling finances. The entertainers and stagehands, despite their differences, are resolved to  keep the show going and to continue making a living.

Lady of Burlesque is notable for its portrayal of burlesque stars. Striptease was a predominant feature of Thirties and Forties burlesque shows. Gypsy Rose Lee became one of its biggest stars as headliner of Minsky’s Burlesque, where she performed for four years. Lee was known for a slow, provocative striptease style—one that focused more on the tease than the strip. She was also famous for her onstage wit and ability to work with comics. Off stage, Lee was an outspoken advocate for workers and union laborers.

All of this is brought to life in the character of Dixie Daisy played by Barbara Stanwyck. One imagines watching Stanwyck onstage as Dixie was much like watching Lee on stage. The on-stage performances of Stanwyck as Dixie are provocative, funny and entertaining. Her backstage interactions show a strong-willed woman working hard to make a living and standing up for the rights of her fellow performers.

It’s clear Lee created Dixie in her own image to mirror her own attributes as a performer and as a person. Stanwyck’s Dixie is gorgeous and seductive in a striptease, funny in a comic sketch, and charming singing the film’s campy song “Take It Off the E String, Play It on the G String.” And she’s unflappable and determined as she solves the murders for justice and to save the show.

Lady of Burlesque delivers it all.

Available for viewing now on The Film Detective.