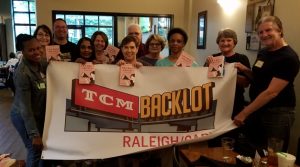 On Saturday, August 24, the Raleigh/Cary TCM Backlot Chapter hosted a Chapter social gathering at Vic’s Italian Restaurant & Pizzeria. Eleven Chapter members and significant others enjoyed pizza and pasta at a social focused on TCM host Alicia Malone’s book on the history of women in film, Backwards & In Heels. 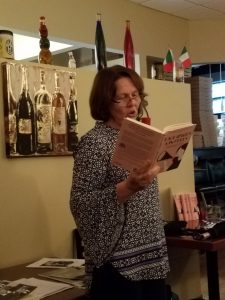 Tina Reads a Passage from Backwards & In Heels

Chapter member Tina generously provided copies of Backwards & In Heels to other members in July so they could read it before the August meetup. After everyone had eaten, Tina gave a very informative presentation based on her own research that included historical facts to set the stage for what the times were like in the early days of Hollywood. Along the way, she highlighted several women included in Backwards & In Heels including Mary Pickford, Margaret Booth, Mae West and Hattie McDaniel.

As we wrapped up, all agreed that we could certainly have another session on Backwards & In Heels and as the book’s subtitle reads: The Past, Present and Future of Women Working in Film. 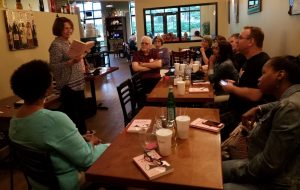