Carnival Story (1954) starring Anne Baxter and Steve Cochran tells the story of Grayson’s, an American traveling circus performing in Munich, Germany. Baxter plays Willi, a local girl down on her luck who arrives on the midway hungry and with only the clothes on her back. Desperate, she picks the pocket of carnival barker Joe, played by Steve Cochran. Joe catches Willi and, taken with her beauty, offers to get her a job with the carnival. 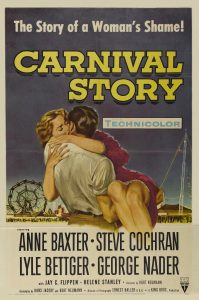 The Story of One Woman’s Shame

Willi starts out as kitchen help but soon attracts the attention of the star of the carnival, high-dive artist Frank Collini played by Lyle Bettger. Frank is taken with Willi’s looks and sets out to have her join his act. The opportunity to make significant money lures Willi to try it, despite the apparent danger.

Director Kurt Neumann uses the high-dive to show us Willi’s journey in the film. At first, we see her dressed in a white bathing costume being coached by Frank to dive. Little by little she is urged to try new heights, in practice never quite attempting the ultimate feat—diving from a height of 100 feet into a pool of water below. Her white costume reflects her innocence, naivety and trust—that she can successfully join the high-dive act and become an accepted member of the carnival.

Willi achieves new status as a hit in the high-dive act. As she entrenches herself in the carnival, she becomes entangled romantically with both Joe and Frank. The love triangle results in tragedy, and soon Willi is the star of the Collini high-dive act.

The more time Willi spends in the carnival, the more she changes. She transforms into a hardened carny, negotiating for bigger pay and leveraging her power as the star in the main act responsible for bringing in the crowds. Now as she climbs the ladder of the high-dive, she’s outfitted in a flesh-toned costume. Innocence has been replaced by sexiness, shyness by bravado. Yet we soon see that she pays a price for her newfound stardom. 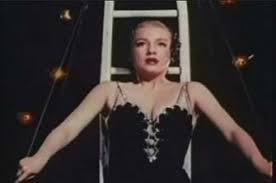 Willi’s final high-dive costume is black. After a short time away from the carnival she has been lured back. A woman in command, she takes to the high-dive as a confident star. She’s no longer interested in Joe and the entanglements of the past. However, her brazen confidence comes at a price as she rebuffs Joe to a tragic ending.

Carnival Story is billed as The Story of One Woman’s Shame. While Willi feels shame in the end as she finds herself at the center of another tragedy, it’s really a story of lust—for sex, money, fame, attention, love, security, thrills, entertainment. Played as a melodrama with gritty characters out for their own self interests, Carnival Story is a morality tale, warning viewers of the dangers of desire.

← Ben-Hur: An Epic Movie Worth Its Epic Reputation A Masterwork on Empathy – To Kill a Mockingbird →