On April 7, 1970, the legendary actor John Wayne won his first and only Academy Award, for his performance in director Henry Hathway’s Western True Grit. Wayne appeared in nearly 250 movies in his career, with this being his only Oscar win. 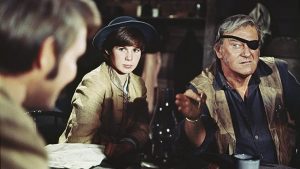 Wayne earned the Oscar for playing Rooster Cogburn, despite an abundance of conflict among the cast. 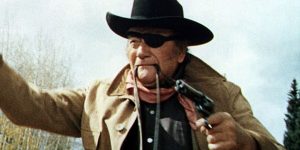 Despite the film’s commercial success, Wayne was not pleased with the finished film. At the ceremony at which Wayne won the Oscar, he personally told Richard Burton that he felt he should have won the instead, for his portrayal of King Henry VIII in Anne of the Thousand Days.

John Wayne’s Best Actor Oscar win was widely seen as a sentimental choice, more in recognition of his forty-year career than for his performance in True Grit. Wayne himself thought he had played much better characters in much stronger films. Still, the character of Rooster Cogburn is one he revisited in the film by that title in 1975 and is a memorable role for the Duke.

Chris Chase is one-half of Classic Couple. Currently he is President of the Triangle Classic Movie Club - TCMC. He has attended the TCM Classic Film Festival in LA six times and the TCMFF 2020 Special Home Edition from his living room. From September 2018 - September 2019, Chris was the President of the Raleigh/Cary TCM Backlot Chapter.