Preparing to see the TCM Big Screen Classics presentation of To Kill a Mockingbird, I read a lot of sources about the behind-the-scenes interactions between the actors. The tidbits that stood out to me were all about the relationships formed, many that lasted a lifetime. 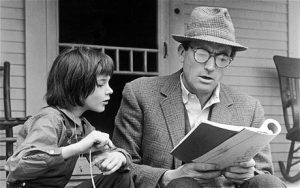 Characters from Real Life: The character Dill in the movie was based on Truman Capote. Scout is Harper Lee herself. As a child, Capote lived with his mother’s cousins in the house next to Lee. Both children were outside the normal social circles of the town. Lee was a tomboy who protected Capote from bullies. He and Lee played together and shared Lee’s typewriter that her father bought them. As children, they took turns dictating stories and typing them up. As adults, Lee and Capote achieved renown as writers: Lee winning the Pulitzer Prize for Fiction for her only novel To Kill a Mockingbird and Capote recognized as a novelist and short story writer whose works were made into more than 20 movies and television dramas. Lee aided Capote in researching his best-selling nonfiction novel, In Cold Blood, which Capote wrote over a four-year period.

Lifelong Friendships: Mary Badham who played Scout at the age of 10 and Gregory Peck who played her father Atticus in the film formed a bond during filming. The two maintained a lifelong friendship and called each other by their character names, Scout and Atticus, until Peck’s death in 2003. Mary’s acting career only included a few films after To Kill a Mockingbird, but Peck was a big influence on her life.

Authenticity in Acting: Harper Lee cried one day of shooting when she saw Gregory Peck walking across the front yard. She was overcome by how much Peck reminded her of her father, Amasa Coleman Lee, on whom the character of Atticus Finch was based. Amasa Coleman Lee died before filming of To Kill a Mockingbird was complete. To honor Peck’s portrayal, Lee gave him her father’s pocket watch. Peck wore the the watch the night he accepted the 1963 Academy Award for Best Actor for his role in the movie.

Chris Chase is one-half of Classic Couple. Currently he is President of the Triangle Classic Movie Club - TCMC. He has attended the TCM Classic Film Festival in LA six times and the TCMFF 2020 Special Home Edition from his living room. From September 2018 - September 2019, Chris was the President of the Raleigh/Cary TCM Backlot Chapter.