Most fans of Steel Magnolias (1989) likely cannot imagine anyone else in the iconic principal roles in the film: in order of billing Sally Field, Dolly Parton, Shirley MacLaine, Darryl Hannah, Olympia Dukakis and Julia Roberts. Among these six women, four are Oscar winners: Sally Field, Shirley MacLaine, Olympia Dukakis and Julia Roberts and one is an Oscar nominee: Dolly Parton. 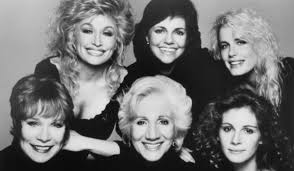 At the time Steel Magnolias was made, however, the film grappled with cast selection and director Herbert Ross clashed with the actors.

Casting for the part of Shelby was challenging. Meg Ryan, originally attached to the film, chose to make When Harry Met Sally instead. Winona Ryder and Laura Dern were also considered for the part. Finally, the casting director suggested Julia Roberts read for the part, and writer Robert Harling, who based the play and screenplay after the life and death of his sister, advocated for her. Seems he was right in the selection. Julia Roberts was nominated for a Best Supporting Actress Oscar for her portrayal of Shelby in the film.

Daryl Hannah was originally turned down for the role of Annelle as director Herbert Ross thought that she was too attractive. She asked to read for the part anyway and arrived at the studio dressed as Annelle so unrecognizable that security refused to let her in. In her portrayal of Annelle, Hannah proved she could successfully play a character part, something she had not done yet in her career.

The producers thought the audience would not believe Sally Field in the role of mother to a 22-year-old. Field, who was 43 at the time, pointed out that her first son, Peter Craig, would turn 20 around the time the film was released.

In a 2003 interview, Sally Field and Shirley MacLaine remarked that director Herbert Ross was very difficult to work with, telling the main lead actresses they couldn’t act. They recalled that in particular he singled out Julia Roberts, often driving her to tears.

Julia Roberts was not the only target of director Herbert Ross and his ire. He is said to have reprimanded Dolly Parton and asked her if she could act. Her reply, “No, but it’s your job to make me look like I can!” Indeed it was.

At the 30th anniversary of Steel Magnolias, the actresses in the film and their performances are iconic as true steel magnolias epitomizing feminine strength and fortitude.