In preparation for seeing the TCM Big Screen Classics 55th Anniversary showing of My Fair Lady (1964), I cast around for some trivia about the cast. Controversy about the leading roles abounds. Still, the resulting film garnered the following Oscar wins at the 1965 Academy Awards:

Now, on to some My Fair Lady casting hubbub courtesy of IMBD. 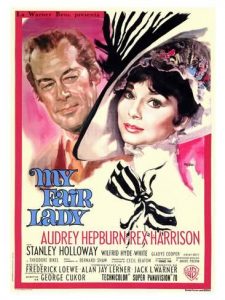 Casting Professor Henry Higgins
Jack L. Warner originally didn’t want Rex Harrison to reprise his stage role as Higgins for the film version, since he had seen Cleopatra (1963) and thought the actor looked too old to be believable as Audrey Hepburn’s love interest. Peter O’Toole was considered for the role of Prof. Higgins, but his salary demands were too high. Harrison responded in a letter to Warner Bros. that he had only looked old as Gaio Giulio Cesare because he had been playing an epileptic at the end of his life, and after sending some publicity photographs of himself–minus his toupee–he was eventually cast.

To me, this role just belongs to Rex Harrison, and I was privileged as a child to see him play it on the stage. But, Peter O’Toole is an indeed an intriguing choice.

When asked why he turned down the role of Henry Higgins, Cary Grant remarked that his original manner of speaking was much closer to Eliza Dolittle. Cary Grant told Jack L. Warner that not only would he not play Henry Higgins, but if Rex Harrison was not cast in the role, he wouldn’t even go see the picture.

Even though I am a mega Cary Grant fan, I don’t see him in the role. I’m with Cary, this part belongs to Rex Harrison.

Casting Eliza Doolittle
The role of Eliza Doolittle was originally played on Broadway by Julie Andrews. However, she was denied the role because the film’s producers didn’t think she was “known” enough as a film actress. Audrey Hepburn apparently believed that Julie Andrews should have played Eliza Doolittle in the film, but was told by Jack L. Warner that she wouldn’t be cast even if Audrey turned the role down. Audrey Hepburn herself revealed years later that had she turned down the role of Eliza, the next actress to be offered it would not have been Julie Andrews but Elizabeth Taylor, who wanted it desperately.

While I would love to have seen Julie Andrews in the role of Eliza Doolittle in the film, I do have great affection for Audrey Hepburn’s portrayal. Her transformation is stunning to behold. And I can’t picture Elizabeth Taylor in the role, talented though she was.