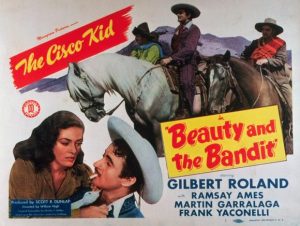 Beauty and the Bandit Movie Poster

In the 1930s and 1940s, a Saturday matinee typically offered audiences a serial film, animated cartoons, newsreels and a couple of feature films. The serial Western enjoyed its heyday as moviegoers followed the adventures of a central hero from film to film, sometimes week after week.

Between 1928-1950 twenty-five films featured The Cisco Kid as one of those heroes. Warner Baxter, Cesar Romero and Duncan Renaldo all played the starring role in at least five films each.

Traveling from town to town across the Old West, The Cisco Kid and his banditos dodge the law while fighting injustice. Gilbert Roland appeared as The Cisco Kid in six movies between 1946-1947. Beauty and the Bandit (1946) marks his third appearance in the role.

Beauty and the Bandit checks all the required elements of a serial Western:

The Beauty, Ramsay Ames as Jeanne Du Bois, and the Bandit, Gilbert Roland as The Cisco Kid 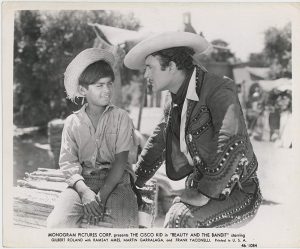 The Kid and The Cisco Kid

Set yourself up a Saturday matinee and watch Beauty and the Bandit, available in the February lineup on The Film Detective.

← Hers & His Perspectives: Street of Shadows (1953) We Could Have Danced All Night: Raleigh/Cary TCM Backlot Chapter Outing →