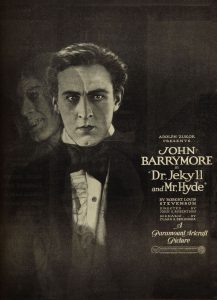 The 1920 silent film Dr. Jekyll and Mr. Hyde directed by John S. Robertson is known as one of the great film performances by John Barrymore. Filmed during the day while at the same time the great theater actor appeared on the stage at night, Barrymore’s performance is an acting tour de force.

Barrymore plays the title leading role of both Dr. Jekyll, a London gentleman doctor with a compassionate heart, and his alternate persona Mr. Hyde, a savage with a proclivity for violence and debauchery, to perfection.

The film’s plot diverts some from Robert Louis Stevenson’s 1886 gothic novella, Strange Case of Dr. Jekyll and Mr. Hyde, upon which it’s based—notably in the prominence of women. While Stephenson’s Mr. Hyde is a violent killer, Barrymore’s Dr. Hyde is a sexual predator. This theme is presented in the relationships the men in the film have with women, something not a focus in Stephenson’s novella.

Barrymore’s Dr. Jekyll is a respectable gentleman, focused on his laboratory studies and his work treating the poor in his free clinic. He has a love interest in beautiful high-society ingénue Millicent Carewe, played by Martha Mansfield. And yet, his devotion to his science and medical work has him barely making time for her.

Indeed, it is Dr. Jekyll’s seemed indifference to Millicent that leads her father Sir George Carewe to question that the doctor has limited his experiences and never yielded to temptation. Sir George shares his philosophy with Dr. Jekyll stating, “A man cannot destroy the savage in him by denying its impulses. The only way to get rid of a temptation is to yield to it.” To draw out the baser instincts of Dr. Jekyll Sir George takes him to a seedy music hall and enlists a dancer to attempt to seduce him. While in the moment Dr. Jekyll resists temptation, it is this event of awakened sexual desire that drives him to explore the two sides of human nature, good and evil, in his laboratory and create the potion that unleashes Mr. Hyde. As Dr. Jekyll says, “Wouldn’t it be marvelous if the two natures in man could be separated—housed in different bodies? Think what it would mean to yield to every evil impulse yet leave the soul untouched!”

The romantic subplot of the film and the desire to yield to desire uniquely drives this telling of the story. This Mr. Hyde is not the monstrous murdering brute of Stephenson’s novella. Rather he is a sexual predator whose first act is to seduce the very dance hall girl that Dr. Jekyll rejected.

The different focus of this Mr. Hyde—on sexual prowess and deviant behavior—works because it is Barrymore in the role. Known as “The Great Profile,” Barrymore was extremely good-looking and one of the most idolized actors of his day. As Dr. Jekyll he is handsome and attractive to women, yet unaware of his own powers of seduction. As Mr. Hyde, he is grotesque and conniving, but able to lure women to do his bidding as he frequents opium dens, dance halls, and backroom bars.

Barrymore’s Mr. Hyde as a sexual predator is particularly powerful because the actor did not rely on makeup in the first transformation from Dr. Jekyll into Mr. Hyde. Rather, Barrymore accomplished the transformation from virtuous, handsome Dr. Jekyll into despicable, hideous Mr. Hyde solely through contorting his facial features and changing his body language before the viewer’s eyes. He changes his posture into a hunch, makes clawing motions with his hands, tousles his hair, raises his brows, and clenches his face into a grimace—all without makeup, all without editing. Those first moments of transformation are all Barrymore as actor.

It is only later in this scene after cuts that prosthetics are added to transform Barrymore’s hands into Mr. Hyde’s and a slight alteration in makeup looks to be added to darken his visage. But without aid of any of this, Barrymore had already transitioned from Dr. Jekyll to Mr. Hyde, right before the audiences’ eyes.

This only a seasoned stage actor could do. That a handsome man could make himself physically repulsive just through gesture and expression is the reason this is one of the best performances of Dr. Jekyll and Mr. Hyde ever filmed.

Barrymore’s commitment to seeing his Mr. Hyde become more hideous and more marred as the film continues—aided by heavier makeup and disfiguring prosthetics—cements his commitment to snaring the audience in the torment of Dr. Jekyll as he loses his ability to control that part of himself that is Mr. Hyde.

Barrymore’s powerful performance garnered him critical acclaim at the time hailed in print as “the star’s picture form the very outset, and it is the star that makes it,” and as “a masterpiece and a remarkable piece of work.” Indeed, the film was so successful in its day that the United States Navy used stills of Barrymore in its recruiting posters at that time. The film has also been included among the American Film Institute’s 2001 list of 400 movies nominated for the top 100 Most Heart-Pounding American Movies.

In 2020, 100 years from its release the film not only holds up as a unique multi-layered telling of an iconic story, but as a gripping gothic horror film that for any classic cinema lover is a must-see masterpiece.