On Sunday, October 7 TCM aired Flying Down to Rio (1933). The main stars of the film are Dolores Del Rio and Gene Raymond. Dolores does a beautiful job being, well, beautiful as she plays the exotic Brazilian love interest of charming band leader Gene Raymond, also well played.

But for me and many other classic movie fans, the real attraction of this film is that it marks the first on-screen pairing of Fred Astaire and Ginger Rogers. Both Fred and Ginger have opportunities to showcase their individual talents in the movie. They both have solo singing numbers and both play supporting characters important to moving the story line along. Their independent roles solidly contribute to the enjoyment of the film.

Where they take their contribution to the movie to the next level is when they take to the dance floor together. It’s pure magic watching them dance to the musical number “The Carioca.”

This scene, in which Fred and Ginger are watching the locals perform this unique dance, contains one of the best foreshadowing lines in the movies. When Fred invites Ginger to “try this thing just once” her response to Fred is, “We’ll show ’em a thing or three.” Show us they do.

And show us they did. The iconic dance partners went on to make nine more movies together over the next 16 years. Those pictures brought us some of the most memorable dance scenes ever put to film and linked them as “Fred and Ginger” in movie history. 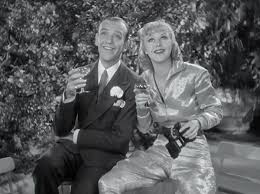 Fred and Ginger – The Magical Beginning

The beginning of that wonderful pairing is so evident in the final shot of Flying Down to Rio. In it, Fred and Ginger are toasting the future of another couple, but to me this scene signifies them toasting their own future as a dance team.

The star power in each of them shines through. The chemistry between them is evident. The promise of what is to come from this mesmerizing dance pair hangs in that final shot. It’s movie magic at its best.

← TCM Chapter Goes to Washington with Mr. Smith Quotes to Die Hard For →