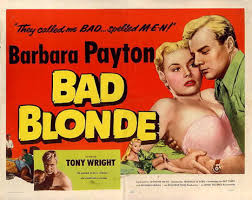 Bad Blonde (1953), released as The Flanagan Boy in the UK, lives up to the promise of its US title. Bad Blonde delivers the key elements of a classic film noir—a seedy underworld, a blonde seductress, a gullible lover, a scorned husband, and two ruthless murders.

The film opens at a carnival with two barkers calling for onlookers to enter the tent where an audience member will fight one of the professional boxers. In a setup, a trained amateur boxer takes the ring and knocks out one of the pros. The boxer, Johnny Flanigan played by Tony Wright, impresses the carnival promoters such that they take young Flanigan under their wings in an attempt to launch a comeback into prizefighting.

Enter Giuseppe Vecchi a wealthy Italian with the connections to back the fighter. Flanigan’s future looks promising until he meets Giuseppe’s wife Lorna Vecchi. Lorna, played by Barbara Payton, married her rich and doting husband when he owned a club where she was a dancer. She’s a true trophy wife all too eager to show her displeasure at her jovial husband’s eccentricities. 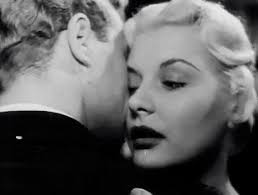 The first time Flanigan lays eyes on Lorna it’s clear he is ripe for seduction. And seduction is clearly on Lorna’s mind, evident as she licks her lips while her eyes scan Flanigan’s shirtless, sweaty body after a bout. He may beat opponents in the ring, but Flanigan doesn’t stand a chance against Lorna.

Lorna gets what she wants and soon she’s embroiled in an affair with Flanigan. Determined to make herself a wealthy widow, she begins enticing her lover in a plot to kill Giuseppe. Two murders follow, both orchestrated by Lorna.

She gets her comeuppance, but only after ruining everyone’s friendships, family and future. She’s one bad blonde.

Directed by Reginald Le Borg, mostly known for low-budget horror films, Bad Blonde proves to be a gripping film noir. Casting Barbara Payton as Lorna was true genius. In the film she is truly a loathsome seductress, the type you love to hate.

In life, Barbara Payton was an actress infamous as a bad blonde in Hollywood. A gorgeous peroxide-blonde sexpot, she had numerous affairs with top stars and producers of the 1950s, many of them married. A scandalous love triangle made headlines in 1951 sending her promising career plummeting. In 1953, she went to England to try to revive her career making Bad Blonde and another film produced by Hammer Films that same year.

All of this was to no avail and two short years later in 1955 her acting career ended. Payton slipped into alcoholism and prostitution in the ensuing years and, with seemingly no regrets, collaborated on a tell-all book in 1963 titled “I Am Not Ashamed” recounting her ups and downs as a “con girl in specialized areas of living.” She died of heart and liver failure at the age of 39.

A tragic end for a bad blonde.

For more on one of Hollywood’s biggest and most shocking, self-inflicted tragedies, author John O’Dowd revisits the life of Barbara Payton in a new 2019 book titled “Barbara Payton: A Life in Pictures” or his prior work on her “Kiss Tomorrow Goodbye: The Barbara Payton Story.”