When TCM features the 80th anniversary of The Wizard of Oz (1939) later this month, Frank Morgan will take the spotlight as the title character of the beloved movie. Indeed he will always be remembered as Professor Marvel/The Wizard in one of the most famous films ever made. 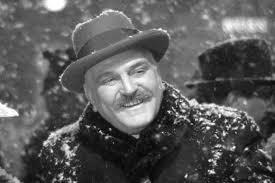 But my favorite performance of Frank Morgan’s, the one where he demonstrates true acting wizardry, came a year later in his portrayal of shop owner Hugo Matuschek in The Shop Around the Corner (1940).

The main plot of The Shop Around the Corner centers on two gift shop workers played by Margaret Sullavan as Klara Novak and James Stewart as Alfred Kralik, who dislike one another professionally, but unknowingly have fallen in love with one another as anonymous pen pals. The chemistry between Sullavan and Stewart, whether bantering as adversaries or pining as love interests, is a delight to watch. An enduring sentimental sweetheart story, the film has become a favorite Christmas classic and a story that has been reincarnated several times for the screen. For me, the original has the most allure, and I attribute much of my affection for the film to Frank Morgan’s performance as the shop owner, Hugo Matuschek.

Hugo Matuschek is a no-nonsense business owner feeling the pressure of making the right decisions for the gift store bearing his name as the holiday season approaches. He’s also a man who just hired a private detective to follow his wife on suspicion of infidelity. What we see in Mr. Matuschek is a man whose personal and professional lives collide in a devastating manner.

In portraying the character of Mr. Matuschek, Frank Morgan delivers a full range of behavior –  restraint, pride, outrage, hubris, sadness, despair, remorse, embarrassment, forgiveness, vulnerability, charity, generosity, joy and delight. It’s a tall order for any actor, particularly in a supporting role, but Morgan delivers a stellar performance of great emotional range in the film. He creates a man we can understand and with whom we can empathize.

In the same way you want Miss Novak and Mr. Kralik to discover their love for one another, you can’t help but want Mr. Matuschek to find some happiness by film’s end. It’s like wanting a wizard to grant their wishes. And by this film’s end, they are.