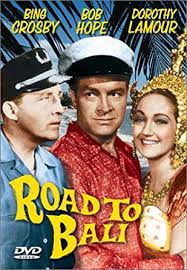 The “Road to” series of seven comedy films featuring Bing Crosby, Bob Hope and Dorothy Lamour spanned from 1940 to 1962. Each movie was set in an exotic location designed to spoof popular film settings—from “natives in the jungle” and “Arabian desert nights” to “hijinks on the high seas” and “treasures of the Orient.”

Since the 1940s, the iconic film series has been the subject of homage. It’s parodied in 1944’s Popeye cartoon We’re On Our Way to Rio, in the 1981 Mel Brooks comedy History of the World, Part I,  and even the animated TV series Family Guy still on today has aired eight episodes that spoof the original “Road to” films, among many more films and television shows.

The “Road to” films followed a formula. Each film parodied movie genres and included inside jokes tailored for audiences at the time. Audiences today should appreciate them as both cultural snapshots and fun-filled farces.

Each movie is short on plot but high on gags. Hope and Crosby typically play entertainers or con men down on their luck. Their need of money drives them into some form of money-making scheme, usually dreamed up by Crosby with Hope duped into doing most of the requisite work. 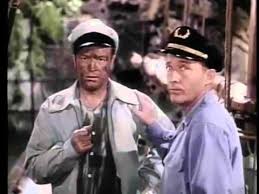 The “Road to” movies served as vehicles for Hope and Crosby to showcase their individual talents as well as their appeal as a buddy duo. Hope never missed an opportunity to send up a joke, even breaking the “fourth wall” and addressing the film-going audience directly. Crosby the crooner sings in each film delivering wonderful solo and duet performances. Together they serve up the gags and were known for ad-libbing the dialogue in the films. The scripts became mostly directional, rather than literal.

Each movie includes a couple of gags that became signatures of the “Road to” movies. When they need to get out of a jam, Hope and Crosby would start playing patty cake to distract their adversaries before throwing punches. Sometimes it worked, sometimes it didn’t, but it’s a mainstay in the “Road to” recipe. Also, in the formula would be some reference to Hope overacting in his attempt to win an Oscar, complete with a fourth wall plea to studio executives to grant him the award. 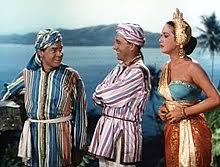 These iconic elements are fun to watch for in the “Road to” movies—and add to the charm of the series. Audiences don’t know when they’re coming, but they know they will.

In each plot, the buddies pledged their loyalty to one another and to their plans. But those plans were always foiled by a beautiful woman.

The beautiful woman came in the form of actress and singer Dorothy Lamour. Appearing in all seven films, Lamour was the central female character in all but the final “Road to” picture.

In her very first film role, Lamour played an island princess, establishing herself as a striking sarong-wearing beauty. The exotic locations of the “Road to” movies were the perfect vehicle for Lamour, whose star power at the time of the first “Road to” movie had her billed after Crosby and before Hope.

An experienced actress, naturally Lamour tried to follow the script in the movies. She quickly realized working with Hope and Crosby that she should just go along with them in a scene. Hope conveyed his admiration for her saying, “Dottie is one of the bravest gals in pictures. She stands there before the camera and ad-libs with Crosby and me knowing that the way the script is written she’ll come second or third best, but she fears nothing.”

Indeed, while some may consider the “Road to” movies Hope and Crosby buddy films, Lamour deserves just as much credit for their success. 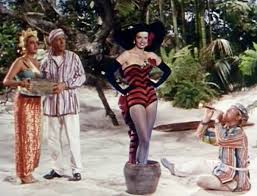 Road to Bali (1952) stands out in the “Road to” series as the only movie filmed in color. It’s also the only one to take the spoof of Hollywood to the next level, featuring several cameos of famous stars of the time including Humphrey Bogart, Dean Martin and Jerry Lewis, and Jane Russell.

In need of money, Hope and Crosby take jobs as deep sea divers for an island prince. They meet Lamour, a half-Scottish princess whose father lost a now-cursed fortune at sea. Hope successfully dives for the treasure, but their adventure ends in shipwreck. In an unfamiliar island jungle, Hope and Crosby vie for the affections of Lamour’s princess who ends up falling for both men. Soon they are discovered by the local natives who reveal that women can take multiple husbands. Naturally, the wedding does not go as planned. But all’s well that ends well, with the three eventually finding a way off the island, treasure in hand, and an additional companion at their side.

The sixth film in the series, Road to Bali delivers all the “Road to” movie elements—hilarious gags and pratfalls, over-the-top costumes and sets, crazy situations, and entertaining song and dance numbers. The trio of Hope, Crosby and Lamour demonstrate the perfection of their chemistry and their craft. And they do it in Technicolor, which makes this the perfect “Road to” to watch to take in the experience and truly understand what these films were and why they continue to be referenced today.