The Gorilla (1939) is billed as a horror comedy. When released that may have felt accurate. Eighty years onward, it shows more as a spooky spoof than anything, especially when watched with an eye on Bela Lugosi. 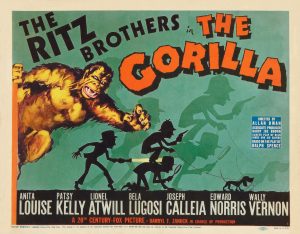 The Gorilla is one of Lugosi’s lesser known films, released at a time when his career was in a dip—something he experienced several times over the 38 years in which he acted in films. By 1939 he was taking character roles and floating in and out of Hollywood’s Poverty Row. Still, he was able to parlay his early star power as Dracula to earn named billing in films like The Gorilla where he is a supporting character.

Famed for playing Count Dracula in Universal’s 1931 pre-Code vampire-horror film directed by Tod Browning, Lugosi was subsequently typecast as a horror villain for most of his career. Though he auditioned for other roles, he never truly broke type and many of the roles for which he is best known cast him alongside Boris Karloff, himself best known for his portrayal of Frankenstein 1931. Once they appeared in these iconic roles, both Lugosi and Karloff struggled to shake the horror genre for the rest of their careers.

With a need to work, Lugosi signed on to play Peters the butler in The Gorilla, a role originally meant for another horror film star of the day, Peter Lorre. Lugosi’s acting style was often criticized as wooden and his heavy Hungarian accent contributed to his limited casting. But these very attributes play to his favor in The Gorilla. 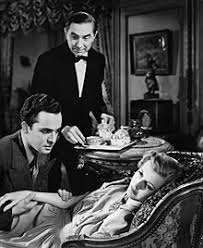 Bela Lugosi as Stevens the Butler

The plot of The Gorilla centers on a wealthy man, Walter Stevens, who receives a menacing letter from a killer known as The Gorilla. Rather than calling the police, the millionaire hires a team of three detectives played by the Ritz Brothers to investigate and help protect him on the eve the killer threatens to murder him by midnight. The plot thickens when its discovered that Mr. Stevens has amassed an enormous debt, one he cannot repay without an inheritance. Enter his niece, recently arrived for a visit, who could also be a target for foul play as her inheritance could solve Mr. Stevens’ debt problem.

As the night of the threatened murder develops, an escaped gorilla makes its way to the mansion. Mayhem ensues as house guests disappear through hidden passageways and sporadically encounter the gorilla—all while the clock keeps approaching midnight. Sightings of the gorilla in the mansion contrasted with the arrival of mysterious strangers suspected of being the killer with the moniker The Gorilla keep everyone in suspense.

Throughout the Ritz Brothers, who received top billing in the film, add to the confusion as they bumble, stumble and fumble in their investigation. Known for their exaggerated comedic style, the Ritz Brothers make good use of the repetitive banter and frantic physical comedy they were known for as a trio appearing in nearly twenty films in the 1930s and 1940s

But really, it’s Lugosi’s supporting character that is the most intriguing in the film. Throughout his performance, Lugosi as Peters delivers his lines drolly, maintaining his serious composure despite the surrounding shenanigans. The house maid Kitty is clearly scared of him and at times he seems to just appear in the room with his entrance unknown. Peters ominously looms over others and in one perfectly filmed scene it appears he is going to bite the neck of Stevens’ niece Anita Louise.

Lugosi clearly channels his experience as a master of horror to add to the suspense of The Gorilla. His portrayal of the grim and somber Peters contrasts perfectly to the growing hysteria of the other characters as events unfold. Eventually one even begins to suspect Peters of wrongdoing.

This is all credit to Lugosi whose portrayal seems to be giving the audience a “wink and nod.” Clearly Lugosi knows he is typecast; so he gives it his all, delivering just the kind of performance we want from him. He’s in on the joke, and it’s his performance that makes this spooky spoof worth watching in the Lugosi film catalog.

Throughout his career Lugosi made numerous pleas to be cast in non-horror roles. While he plays to type in The Gorilla, the film is certainly a departure from traditional horror as a farcical suspense thriller. It’s refreshing for his fans to see the Lugosi they love in this lighter fare. One hopes he enjoyed himself and that The Gorilla offered him a bit of the variety he spent his entire career seeking.