What do you do when you’re making King Kong and you’ve got time on your hands? You film King Kong during the day and you make another movie at night. 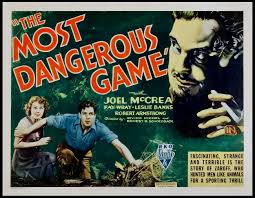 Poster for Suspense Thriller The Most Dangerous Game (1932)

That’s just what King Kong (1933) directors Ernest B. Schoedsack and Merian C. Cooper did. Using the same King Kong jungle sets, Schoedsack and Cooper shot The Most Dangerous Game (1932) as an adaptation of the 1924 short story of the same name.

Joel McCrea plays Bob a renowned big game hunter and author whose ship sinks off a small island. Bob as sole survivor makes his way across the island to a castle seeking refuge. There he is greeted by master of the castle Count Zaroff played by Leslie Banks.

Zaroff offers Bob his hospitality and soon he is introduced to Martin and Eve who explain they were also recently shipwrecked along with two sailors in their party. When an opportunity arises to speak privately with Bob, Eve conveys her suspicions that all is not right. It appears that after being given a tour of the Count’s mysterious locked trophy room, the two sailors went out hunting but have not returned. 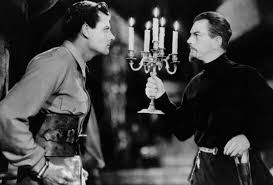 Two Hunters Confront One Another

As Count Zaroff regales the group with his hunting exploits he reveals an insatiable need to hunt more and more challenging game. He claims he was bored until he discovered “the most dangerous game” on his island.

It does not take long before Eve and Bob discover exactly what the most dangerous game is—humans, who the Count hunts on the island, hanging their heads in his trophy room. They find themselves the prey in a contest to see if they can survive the night and thereby win their freedom and safe passage off the island.

What ensues is a fast-paced thriller in which Bob and Eve must keep themselves alive among the elements of the island—dense jungle, impenetrable fog, perilous cliffs, dangerous waterfalls, treacherous bog—while on the run from their hunter and his pack of vicious dogs.

Joel McCrea as Bob and Fay Wray as Eve

The hunt is an edge-of-your-seat nail-biter. In the end, Bob truly understands what it is to be the hunted rather than the hunter, and it changes his perspective forever.

Fay Wray notably gives a remarkable dramatic performance as Eve, while showcasing her physical prowess traversing the jungle set. Even more impressive is imagining how she handled the challenges of The Most Dangerous Game shoot at night only to return to the demands of the King Kong set during the day.

Released the year before and her first film for RKO, The Most Dangerous Game offers a sneak peek into Wray’s appeal as a heroine. King Kong is her most memorable role in the film credited with saving RKO at the time. But truly, she should be remembered for both films, filmed at the same time and which together make a powerful Fay Wray double-feature.