John Wayne is a favorite actor of mine, especially in Westerns. Until I watched The Desert Trail (1935), available in March from The Film Detective, my knowledge of Wayne in Westerns began with his appearance in Stagecoach (1939). Working with director John Ford, Wayne got his big break portraying the Ringo Kid in the film, cementing his status as a star. But it’s movies like The Desert Trail, made four years earlier, where Wayne cut his teeth as an actor. 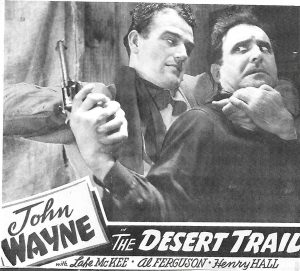 The Desert Trail is one of 70 Westerns and adventure films Wayne appeared in before Stagecoach. It’s one of eight movies he made in 1935, all of them Westerns. In it, he plays rodeo star John Scott who, along with his buddy Kansas Charlie, is falsely accused of robbery.

As the two are pursued by the law, they go after the real bandits. Along the way they compete over women including the fickle Juanita known to cozy up to the man with the most money and Anne, an innocent shop girl.

Wayne’s flirtations with Anne are a highlight as he schemes for her attention. We are treated to an early glimpse of Wayne’s methods for getting the girl, well showcased in the courtships in many of his later films.

In the 54-minute run time of The Desert Trail, Wayne demonstrates more of his acting skills that later became iconic.

We see him ride tall in the saddle during multiple horse chase scenes. His banter with Eddy Chandler, cast as Kansas Charlie, shows Wayne as the affable buddy, but one who doesn’t take any guff off his companions. He throws many a punch and fires many a pistol shot as a defender of his own life and honor. 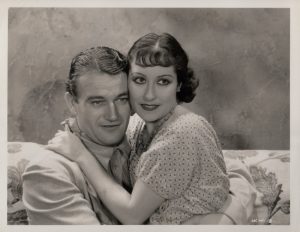 Duke as John Scott and Carmen LaRoux as Juanita

I’m a fan of Wayne’s delivery of memorable dialogue, and he does not disappoint in The Desert Trail with this quotable, “Well, so long Moses, and I hope you get out of the wilderness.”

That line alone is worth the investment to watch Wayne build his acting chops as a Western star in The Desert Trail.

Before Wayne became an iconic Western star with unforgettable roles like J.B Books in The Shootist, Rooster Cogburn in True Grit, John Chisum in Chisum, and Ethan Edwards in The Searchers, he played characters like John Scott the rodeo star in The Desert Trail. Wayne’s star power is visible in this early film as he commands the screen, outshining his fellow actors.

Fans of Wayne and his work in some of the greatest Westerns ever made should spend some time with his early films. The Desert Trail offers all the elements to appreciate the aspiring actor he was early on and the legendary actor he became.