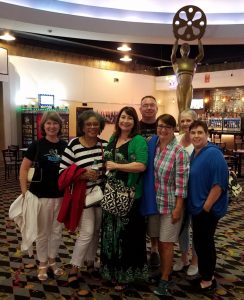 Chapter members had to hit the concession stands for sustenance during the 4 hour and 5 minute epic. But it was well worth it to see such a visually spectacular film on the big screen.

Afterwards, we gathered for a brief post-movie chat at the theater, discussing such topics as where the movie was made and its central character of T.E. Lawrence. Definitely a Chapter movie outing well worth the time investment.