The Six Stooges of The Three Stooges

Generations of Americans know the comedy of The Three Stooges from the regular airing of their escapades on television since 1958. A slapstick team, they were beloved for their physicality and the distinct characters of the three active stooges appearing in the skit. A  working comedy team from 1922 until 1970, six stooges performed over the act’s fifty-year run: Moe Howard and Larry Fine as mainstays joined by a third Stooge played by, in order of appearance, Shemp Howard, Curly Howard, Shemp Howard again, Joe Besser, and Curly Joe DeRita.

In 1934, The Three Stooges act signed a contract with Columbia Pictures to appear in two-reel comedy short subjects that required them to release up to eight short films each year within a 40-week period. Over 23 years working for Columbia, the Stooges appeared in 190 film shorts and five features. It’s this content—mostly The Three Stooges shorts—that is well known by television viewers.

The Three Stooges were at the height of their popularity in the 1930s and 1940s, and it is no surprise that they attempted to enter the television market. Try they did in 1949 when they filmed a live television pilot for an ABC TV series. Jerks of All Trades (1949) was designed as a skit comedy in which the Stooges would appear in a different profession each week, echoing many of the troupe’s shorts where they would try their hand at different jobs or trades only to result in a complete fiasco. 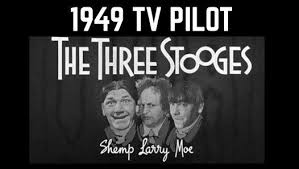 Jerks of All Trades Promo

The Jerks of All Trades pilot, billed on the title card as “The Three Stooges,” featured Moe, Larry and Shemp as interior decorators. They are hired by Mrs. Pennyfeather to redecorate her home. What ensures in the 21 minutes of the pilot is classic Stooges as they attempt to paint furniture and hang wallpaper, resulting in disaster.

At the end of the show, Moe, Larry and Shemp return to their office where they paint over “interior decorators” on the list of services displayed on the door. A sneak peek at potential future episodes is offered by the rest of the list which includes among others: physicians, surgeons, lawyers, psychiatrists, optometrists, bank examiners, income tax preparers, and babysitters (18 and over only). 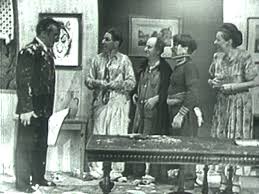 Jerks of All Trades Pilot

Jerks of All Trades gets the audience laughs as The Three Stooges play familiar roles as painters and wallpaper hangers, an excellent vehicle for their slapstick style. Moe, Larry and Shemp are definitely comfortable in their comedy, and the pilot delivers the promise of a successful series to come.

Jerks of All Trades, however, was never seen by audiences. Columbia Pictures, who held the Stooges under contract, exercised their authority in a show of power over the then-new ABC Television Network. The series never went into production and instead Columbia offered ABC a licensing package of 30 Stooges shorts from their film series. And that is how The Three Stooges came to television—not through original programming, but via film short licensing.

Jerks of All Trades went unseen by the public until the 1990s when it was made available, and today it is in the public domain. Fans of The Three Stooges will love it as classic Stooges content and a glimpse into what could have been.

Twenty-one years later in The Three Stooges’ career, another glimpse into what could have been appears in the form of Kook’s Tour (1970). By this time The Three Stooges consisted of Moe, then age 73, Larry, then 68, and Curly Joe, then 61. Kook’s Tour was concepted as a television series in which the Stooges retire from their 50-year career and travel the world. Aided by a cargo plane, they set out to travel with their motor home and boat accompanied by their labrador retriever, Moose. 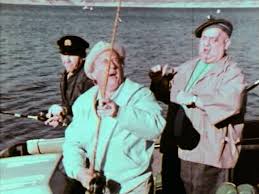 Moe narrates their adventures in the pilot introducing the premise of the series as they “only saw the inside of their dressing rooms as stars” and it’s time for them to see the world. In that statement and in the content to follow there is an undertone of melancholy watching the three men in their older years setting out for adventures on their own.

The 52-minute pilot film for the series sets the Stooges out to explore the national parks and lakes of Wyoming and Idaho. As they camp and fish, there are plenty of opportunities for shenanigans and an impressive amount of physical comedy from the Stooges, despite their ages at the time. But the moments where the three of them appear to just be enjoying themselves as friends are the real magic in this film.

Particularly poignant is when Curly Joe and Larry razz Moe saying, “What are you doing those old jokes for?” That one moment drives home the long history these men share. And it emphasizes how they remained entertainers always ready to serve up a laugh to the end.

And end it did. Sadly, during filming of the Kook’s Tour pilot Larry Fine had a stroke. This ended the careers of The Three Stooges and the series was cancelled. The film remained unreleased until 1975 when director Norman Mauer, Moe Howard’s son-in-law, pieced together the usable footage into a complete episode. It was released as a Super 8 home movie only really seen by collectors of The Three Stooges work. No master prints exist of Kook’s Tour and it has become a true restoration project now available for viewing.

Jerks of All Trades and Kook’s Tour bookend the attempts by The Three Stooges to offer original content to television. These unseen projects both held real promise. Sadly they were overcome by tragedy—Jerks of All Trades falling victim to the studio contract system and Kook’s Tour to Larry’s debilitating stroke. Devoted fans of The Three Stooges should watch both to gain a greater understanding and appreciation of this remarkable act.

2 thoughts on “The “Unseen” Three Stooges”