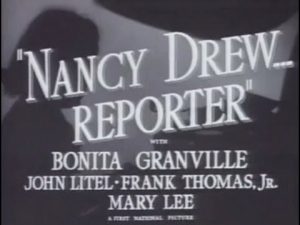 Nancy Drew, the fictional heroine of The Nancy Drew Mystery Stories, first appeared in 1930. For 73 years, until the series ended in 2003, Nancy solved mysteries as a teenage high school graduate living in the town of River Heights with her father, attorney Carson Drew and their housekeeper. Over 70 million copies of The Nancy Drew Mystery Stories have sold, ghostwritten by several authors and published under the collective pseudonym Carolyn Keene.

Nancy Drew is interwoven into American culture and it comes as no surprise that in the early years of the series, the character was given life on the screen. In 1938 Warner Bros. announced its intention to produce a Nancy Drew series of films. Four were released as B-films, each around 60 minutes in length intended to be run before a main feature. The series appeared in rapid succession: 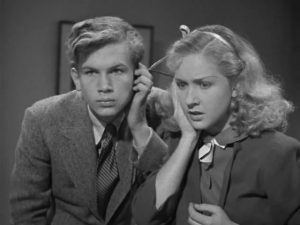 The films were only loosely based on the books, prompting some fan criticism at the time. Nancy Drew in the 1930s books was intelligent, quick-witted and capable. In the films she is gullible and more meddling schemer than professional sleuth. The movies were billed as combination comedy dramas, peppered with comic elements and featuring crimes more severe with dangerous criminals committing murder. Taken apart from the books, the films are an entertaining foray into a beloved character brought to life on the big screen.

The second film in the series, Nancy Drew… Reporter features Nancy as a participant in a contest at a local newspaper. She and her fellow school contestants are competing for a prize for the best news story. Rather than take her given assignment, Nancy intercepts a story intended for a real reporter at the newspaper. She pursues the lead, enlisting Ted in her quest to find a piece of missing evidence and expose the real killer. Despite real danger, Nancy pursues the case, keeping her father and the police in the dark as the plot thickens.

Despite the serious threats as Nancy pursues a murderer, this film in the series amps up the comedy with the addition of two outstanding child actors to the cast. Mary Lee makes her first first screen appearance in the film portraying prankster Mary Nickerson, Ted’s younger sister. Only 14 at the time the film was released, Lee had been singing with the Ted Weems Orchestra for over a year. The film showcases her singing talents in the “Nursery Rhyme Medley”—an entertaining number wherein the kids literally sing for their supper at a Chinese restaurant. 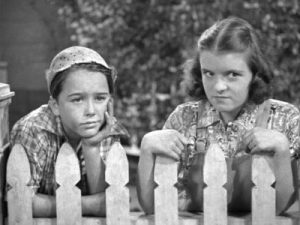 Also ramping up the comedy is Dickie Jones playing Mary’s trouble-making sidekick Killer Parkins. Jones, who began appearing in films at age seven, had appeared in dozens of films, many times as an uncredited little boy, by the time Nancy Drew… Reporter was released. In the film he convincingly imitates Donald Duck to good comedic effect and perhaps in foreshadowing as the next year Jones gave his most remembered performance as the voice of Pinocchio in Disney’s 1940 animated feature.

Warner Bros. has great plans for the Nancy Drew film series, originally planning eight films. The studio established a Nancy Drew Club inspired by the Nancy Drew picture series “created to express views of America’s women of high school age.” Bonita Granville was promoted as president of the national organization and clubs were encouraged to “conduct search for town’s typical American Girl, using Bonita Granville as the standard” as one of the steps outlined for establishing a local club. 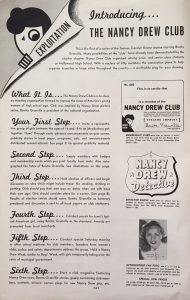 Screenplays for eight pictures were written by Kenneth Gamut, writer for the first four films. A fifth film may have been made its way into production but was never released. Shortly after the fourth film wrapped, Warner Bros. discontinued double features and subsequently cancelled Nancy Drew as a B-film series.

Bringing beloved book characters to life on the screen will always prompt criticism as the actors can never match what lies in one’s imagination. Compared with the books, the film plots are streamlined, the mystery downplayed, the danger intensified, the romance spiced up, the characters simplified—all to appeal to a broader audience of filmgoers. Taken on its own apart from the original mystery stories, Nancy Drew… Reporter, along with the others in the B-film series, is an enjoyable romp.