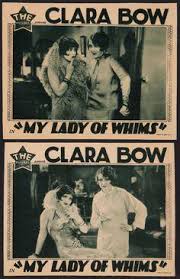 Clara Bow ruled the box-office in the 1920s, with 1925 the year she appeared in the most films—15 in all. Almost half of her 1925 films are lost, but My Lady of Whims survives. Originally seven reels, the surviving shortened version offers a powerful glimpse of Bow’s star power at the age of 20.

My Lady of Whims (1925) begins with the commissioning of Bartley Greer, played by Donald Keith, by a sister seeking to rescue her younger sister Prudence Severn, played by Clara Bow, from a life of presumed debauchery in Greenwich Village. Her rich father pays Bartley to win the trust of his youngest daughter Prudence and bring her back to the family home.

Accepting the assignment, it’s not long before Bartley ingratiates himself into the life of Prudence and her artist roommate Wayne. The two girls lead a bohemian lifestyle, with Prudence an aspiring writer and Wayne a sculptor. Prudence values her carefree existence away from her family, and it’s clear she has discovered several men previously employed by her father to whisk her away from her life in Greenwich Village “where everyone’s an artist—even the street sweeper uses a brush.” 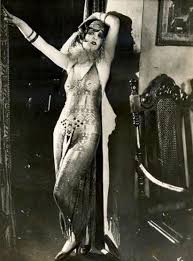 As Bartley sets about wooing Prudence back to her family, we’re introduced to her suitor Rolf, a painter and member of the local art scene. Rolf implores Prudence to accompany him to Benny’s masked rumpus, a costume party where the dress code for guests is “the less worn the easiest mended.” After some cunning deception, Prudence makes it to the party having taken the dress code to heart.

As Prudence, Bow appears at the party in a skintight transparent dress, one that caused a sensation at the time of the film’s release and of which the Cedar Rapids Tribune said “made the eyes of every flapper bulge.” The scandalous dress, even by flapper standards at the time, fully cemented Bow’s status as a sex symbol.

My Lady of Whims provides Bow with a vehicle to showcase not only her beauty but her skill at seducing an audience. Yes, the dress makes an indelible impression, but the plot offers her plenty of opportunities to flirt. A masterful silent film actress, Bow uses her coy smile and her coquettish eyes to build the character of Prudence, a brazen girl determined to live an unconventional life. 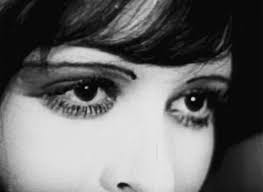 For any 1920s silent film fan, or any fan of Clara Bow, My Lady of Whims is a must-watch. If only for that dress.