A blonde beauty arrives from China to the port in New York City having arranged to sell a one-of-a-king Chinese postage stamp to a well-known collector. Before disembarking she encounters mystery writer Ellery Queen who, smitten with her, makes her business his business. 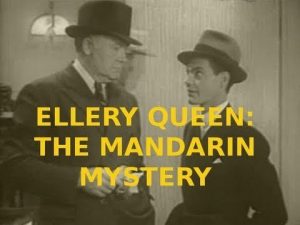 As Queen woos Miss Josephine Temple, he digs into her plans to sell the so-named Mandarin stamp to collector Dr. Alexander Kirk. Dr. Kirk plans to pay $50,000 for the stamp as part of his investment portfolio to provide for his two young wards.

Such a spectacular rarity attracts the attention of a thief, and the stamp is soon stolen from Miss Temple’s hotel room.

Worse still, the suspected thief is found, without the stamp in his possession, murdered in a locked room. When the police are called in, Ellery Queen’s father Inspector Queen leads the investigation.

Father and son quickly clash on who’s in charge of the investigation as mystery writer Ellery cannot help but try to solve the crimes. Fervently believing in the innocence of Miss Temple who is now a suspect, the son sets out to solve the crimes himself, maneuvering around his father and his team of police officers. As the investigation heats up, relationships between the suspects begin to fracture and soon another locked room murder takes place.

Focused on finding the missing stamp and vindicating Miss Temple, Ellery Queen uncovers a stamp counterfeiting ring and soon reveals the connections among the suspects. He outsmarts his own detective father by solving the two locked-room murders, the truly “impossible crime” in which the crime scene gives no indication of how the killer entered or left the room. Our writer hero reveals who, how and why the crimes were committed in the dramatic climax to the mystery. 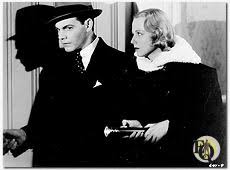 In the end he cracks the case, exposing the killer and recovering the stolen stamp for his love interest Miss Temple. Justice will be served.

The Mandarin Mystery(1936) is part of a long history for the character Ellery Queen. The first piece of Ellery Queen crime fiction appeared in 1929 as a novel The Roman Hat Mystery. It was published under the Ellery Queen pseudonym created by writers Frederic Dannay and Manfred Bennington Lee for the fictional character, a mystery writer who helps his New York City police inspector father solve murders. A successful series of novels and short stories covering 42 years followed, making Ellery Queen crime thrillers among the most popular mysteries published in the history of American fiction.

During the 1930s and 1940s, detective-hero Ellery Queen proliferated as the subject of 25 novels, three short story collections, two comic book series, a series featured on all three radio networks as The Adventures of Ellery Queen, and more. Given the popularity of the mysteries, Ellery Queen was destined to be serialized for the big screen.

Nine films featuring the character were made between 1935 and 1942. Like many serials of the 1930s-1940s, several actors played the lead Ellery Queen role in a series of films—Ralph Bellamy in four films between 1940-41 and William Gargan in three films in 1942. Two films preceded the 1940s succession of films: The Spanish Cape Mystery in 1935 with Donald Cook as Ellery Queen and The Mandarin Mystery in 1936 with Eddie Quillan in the lead role.

Like many actors of the time, Eddie Quillan came from a show business family performing in a vaudeville act at the age of seven with his brothers and sister managed by their parents, both performers. The four children took a screen test for Mack Sennett where only Eddie was chosen, setting him on his way to an acting career in which he made 20 short films between 1926-1927. He transitioned to lead roles in films like Show Folks and The Big Shot and strong supporting actor roles in Big Money and Girl Crazy, making over 20 appearances in feature films between 1928-1936 alone.

His energetic presence, expressive face, and comic timing served Quillan well in playing Ellery Queen in The Mandarin Mystery (1936). He’s a clever, fast talking charmer drawing the audience in from the moment we see him on screen. The dynamism he brings to the Ellery Queen character makes this particular film in the series well worth watching.