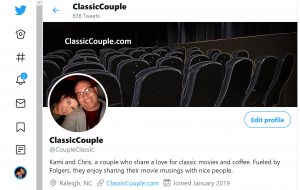 Classic Film Fans! Join us on Twitter as @CoupleClassic live-tweets from the TCMClassic Film Festival 2020 Special Home Edition. We’ve made our TCMFF film-viewing selections and it’s a robust marathon!

As with past festivals, we are running the gamut across genres and have chosen to live-tweet a musical, a Western, a comedy, a Pre-Code, a noir, a drama, and a bonus Pre-Code as one of our favorite classic film genres. We’ll see you at the movies and plan to live-tweet the following films #TCMParty:

8:00 PM Casablanca (1942)
A perennial favorite, this film has been presented three times at the TCM CFF, including a screening introduced by Peter Bogdanovich and Monika Henreid in 2010. Peter Bogdanovich will return to co-host this on-air screening.

SUNDAY, APRIL 19
2:00 PM Red-Headed Woman (1932)
Presented at and introduced by film historian and author Cari Beauchamp at the 2017 TCM CFF.