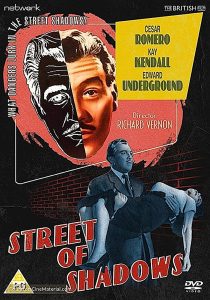 Street of Shadows (1953) is part of the February 2019 lineup on The Film Detective. For us, it’s a new classic movie discovery and one we wanted to collaborate on writing about as the Classic Couple.

Street of Shadows is the original name of a British film noir set in the streets of Soho in London. It centers around two men—Luigi, played by Cesar Romero, the proprietor of a pin-table saloon bearing his name, Luigi’s, and Limpy, his right-hand man so named for the club foot giving him a pronounced limp. Limpy, played by Victor Maddern, idolizes Luigi as his boss and protector.

The first thirty minutes of the film ask a lot of viewers as a variety of characters, each shady in their own way, are introduced. How these far-flung characters—from a fortune teller named Starry Darrell to a socialite named Barbara Gale—fit together is unclear.

Eventually a serious crime is committed at Luigi’s, the pace of the plot quickens and the intersections of the characters are revealed. Now it’s noir time!

The film was re-titled and released in America as The Shadow Man. The American title of the film truly explains what you are watching unfold between the two main characters.

This film is about the concept of a shadow man. He’s the man behind the man—the one who goes unnoticed. Lusting after the women his handsome benefactor and boss attracts, he’s the one who doesn’t get the girl. He’s the trustworthy friend and fixer, keeping the riffraff out of the saloon. Likable but unremarkable, he’s always in the shadow of the more successful man.

In the end we discover Limpy has been greatly underestimated. As he asks a police officer to address him by his real name, Mr. Danny Thomas, we discover that all he really wanted was respect and to step out of the shadows.

This is a movie that asks you to stay with it. The first thirty minutes are challenging as numerous characters are brought in and their importance is unclear.

Cesar Romero is convincing enough in his portrayal of the suave foreign saloon owner caught up in love and caught up in a crime. His character is a combination of tough guy and romantic lead often seen in film noir, and he carries it off well.

But the real star of Street of Shadows is Victor Maddern. He’s the first person we see in the film as he walks the streets in daylight, and we are set up with a first impression of him that plays on our sympathy. As the film unfolds and he navigates the streets in darkness, he becomes less and less a sympathetic character. The shadow man gives a performance worth the wait.

Stick with it to the end. There is a payoff.

February 13, 2019
Classic Movies Hers & His Perspectives The Film Detective No comments Kami and Chris

About Kami and Chris

Kami Spangenberg and Chris Chase are the two halves of Classic Couple. They share a love of classic films and coffee. Fueled by Folgers, they enjoy sharing their movie musings with nice people.