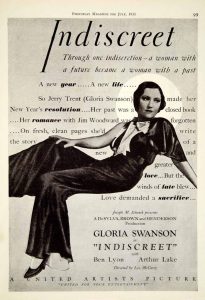 Indiscreet (1931) is described as a comedy, a drama and a musical. Indeed, it is all those things. A pre-Code morality tale, Indiscreet stars Gloria Swanson giving one of her most captivating performances of the 1930s.

Available in April from The Film Detective, Indiscreet is a must-watch for those whose knowledge of Swanson is limited to her tour de force performance as former silent film star Norma Desmond in Sunset Boulevard (1950) or her star turns in silent films of the Teens and Twenties.

The plot of Indiscreet is typical of a pre-Code film. On New Year’s Eve Geraldine “Gerry” Trent decides it’s time to let go of her notoriously unfaithful boyfriend, Jim Woodward. She sends him packing before the stroke of midnight despite his marriage proposal.

Geraldine Trent: No; I’m afraid there’d be, uh, too little marriage and too much “all that.”

In this exchange we get our first glimpse of Swanson’s ability to deliver her lines with the necessary punch and sarcasm. The skills she mastered as a silent star serve her well as we read her mood in her expressions.

After Jim is sent away, Gerry’s friend Buster Collins introduces her to Tony Blake, the author of the book Obey That Impulse. The two are instantly attracted to one another and Tony practices what he preaches by immediately proposing marriage. As Gerry realizes she does love Tony, she feels compelled to confess her past love affair to him. While he is upset, Tony still wants to marry her with the caveat that he never encounters the man from her past. 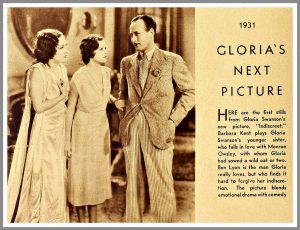 Promotion for Indiscreet as Gloria’s Next Picture

Encounter him he does, in the form of the fiancé of Gerry’s sister Joan, just arrived home from school in France. Hoping to keep Jim’s identity as her former lover secret, Gerry plots to break up her sister’s engagement at a house party thrown by Jim’s parents.

What should be an intense drama quickly transitions to pure comedy as Buster tells Jim’s parents that insanity runs in Gerry’s family. Gerry takes up the ruse and Swanson delivers an ensuing uproarious comedic performance.

The turn of events leads Joan to break off her engagement with Jim, but with collateral damage as Tony too breaks his promise to marry Gerry. Sometime later reconciliations follow, the indiscretions of the past are forgiven, and by film’s end Gerry and Tony marry.

Originally written as a full musical, only two songs made their way into the final cut of Indiscreet. Swanson sings both—“If You Haven’t Got Love” and “Come to Me”—very well, showcasing the singing skills she picked up when she transitioned to talkies. 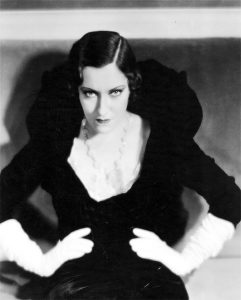 Gloria Swanson in a Rene Hubert Gown in Indiscreet

Despite its relatively predictable plot, Indiscreet presents Swanson with a great vehicle to demonstrate her acting range. A stunning beauty, she’s convincing as the love interest of two men. Pulling on her dramatic strengths, she draws us into her dilemma as a woman afraid to reveal her past indiscretions. And she exhibits her chops as both a singer and comedian as the story requires.

One of the biggest stars in Hollywood at the time, Swanson commanded a top salary in the 1930s. Indiscreet, for which she earned $250,000, is one of the highest-paying films of her career. In the film she gives us what we want—a stellar performance from an illustrious star in her heyday. She gives us glorious Gloria Swanson.