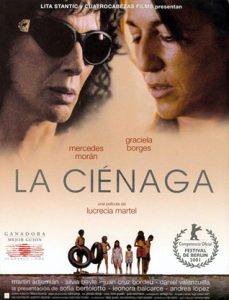 As the Classic Couple, most often we use this platform to write about classic movies—those dating from the 1910s through the 1970s. From time to time, we encounter a film we like to call a new classic discovery. These can be true classic movies we have only recently viewed. They can also be serendipitous encounters with films outside our typical lens.

As part of its Women Make Film: A New Road Movie Through Cinema documentary programming, TCM aired La Ciénaga as a complementary film. Programmed to accompany the episode on openings and tone, the film piqued our interest, and we selected it for the weekly Academy Assignment. Read our Academy Assignment perspective on La Ciénaga.

We know we’ve discovered a special film and filmmaker when we spend a lot of time talking about the movie not just as the final credits roll, but the next day and the day after that. La Ciénaga stuck with us.

Yes, the film is worthy to watch as a study in effective opening and tone. But it offers more than that. 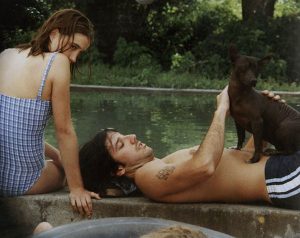 La Ciénaga translates to the swamp. A fitting name for the world viewers bear witness to as the film displays an extended family whiling away the summer in a home fallen to disarray and disrepair. Its inhabitants struggle with the oppressive heat and their disheartening relationships. Everyone seeks escape—the adults self-medicating with drink, the children running wild in nature. As a viewer, you too want to escape.

But you can’t look away, all the while wondering where this film is taking us. And then the payoff.

Add La Ciénaga to your collection.