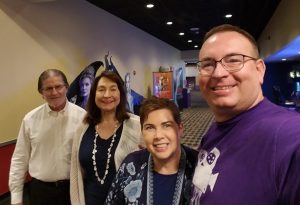 Put on your Sunday clothes when you feel down and out
Strut down the street and have your picture took
Dressed like a dream, your spirits seem to turn about
That Sunday shine is a certain sign that you feel as fine as you look

The last major musical directed by Gene Kelly, Hello, Dolly! hearkened back to the heyday of movie musicals with entertaining dance sequences punctuated by the singing prowess of Barbra Streisand in the lead role. It was easy to see how the film won three Academy Awards in 1970 for Best Art Direction, Best Score of a Musical Picture and Best Sound.

Afterwards, the small group who saw the film went out for classic movie talk, where we met up with an additional member of our crew.

Together, we had a good time putting on our Sunday shine!

Lyrics from Put On Your Sunday Clothes written Jerry Herman for Hello Dolly!