Experience the evolution of slapstick comedy on film in three films released in 1914: Caught in a Cabaret released April 27, His Trysting Place released on November 9, and Tillie’s Punctured Romance released December 21.

Keystone Studios served as production house, Mack Sennett worked as producer and Charlie Chaplin, Mabel Normand and Mack Swain starred in all three films. Watching these three films is like taking a master class in slapstick, an early form of physical comedy relying on exaggerated physicality.

Early vaudeville and music hall comedians honed their skills as pantomime artists performing sketches that relied on amplified interactions and oversized movements—trips, slips, falls, jumps, punches, kicks, and slaps abound. Often centering around fights between characters, the action in this type of performance is augmented with the sound of a slap stick consisting of two thin slats of wood, which when struck together make a slap sound. Slapstick comedy took its name from the slap stick. Fred Karno, an English music hall comedian, is credited with the creation of slapstick comedy as we see it in early films, with Charlie Chaplin a member of his troupe in the 1890s.

Restaurant Ruckus – Caught in a Cabaret, His Trysting Place, and Tillie’s Punctured Romance

Released on April 27, 1914, Caught in a Cabaret was written by Mabel Norman. She and Charlie Chaplin are the only credited cast in this silent short running 16 minutes and 29 seconds. Mabel Norman plays Mabel the Society Girl and Charlie Chaplin plays an unnamed Waiter who fakes being a dignitary to impress her. The film centers on Chaplin as a cabaret waiter and his constant altercations with his boss, coworkers and customers as he comes and goes from the restaurant. When his society girl love interest arrives at the cabaret with a group of her rich friends, our poor waiter is caught as a fraud and the jig is up.

The film uses two settings, a lowly cabaret and a high-society garden party, to show us our waiter as a slothful worker and a con artist. Mostly the cabaret serves as a slapstick showcase with slips, trips and falls and punches, kicks and slaps—each audacious action accompanied by the sound of the slap sticks. This syncopation reminds you of the farcical nature of what could be construed as cruel mean-spiritedness by the characters. This is true situational slapstick, short on plot but heavy on fights and mishaps showcasing the ability of the actors to create a ruckus.

Lest we forget about Mack Swain, he plays three uncredited roles in the film Tough Patron, Party Guest and Boy’s Father, demonstrating the versatility of many early silent film players who took on multiple roles in a single film.

Caught in a Cabaret translates early slapstick sketches traditional to the vaudeville stage to film.

Released on November 9, 1914, His Trysting Place was written and directed by Charlie Chaplin as a short film running 18 minutes and 43 seconds. Of the 36 films he worked on for Keystone in 1914, Chaplin wrote, directed and starred in 20 of them. His Trysting Place brought him together again with Mabel Norman and Mack Swain as costars in a plot based on a mix-up and mistaken identities.

Mabel Norman plays the wife to Chaplin as her husband in an unusually domesticated role for the actor. When she dispatches him to pick up a bottle for their baby, he meets another man, Ambrose played by Mack Swain, in a restaurant where they both stop for a bite to eat. Seated next to one another, they quickly get on one another’s nerves and that’s all it takes for a slapstick brawl to ensue. The men leave the restaurant in a huff, mistakenly taking one another’s coats. The resulting mix-up sparks additional fights between the two men, the men and their wives, and the two couples. The antics are classic slapstick, but in this film with no accompaniment by the actual sound of slap sticks.

This film released just seven months later in 1914 than Caught in a Cabaret, offers viewers plenty of slapstick comedy but with a story line to support the physical scuffles. It contains a more sophisticated use of slapstick rather than the violence for violence’s sake portrayed in other one- or two-reel short films of the time like Caught in a Cabaret.

The next level of refinement in bringing slapstick comedy to the screen is showcased in Tillie’s Punctured Romance. Released on December 21, 1914, it was the first feature-length comedy ever made and was the last film in which Charlie Chaplin was directed by someone other than himself. 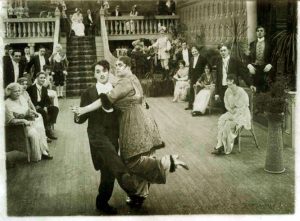 In a run time of 1 hour 11 minutes 25 seconds we watch the story unfold as The City Guy convinces Tillie, a wealthy farmer’s daughter, into eloping with him and absconding with her father’s bankroll. Once the two arrive in the city we discover The City Guy has a former girlfriend all too willing to conspire with him to rob Tillie and run off together. Broke and alone in the city, Tillie takes a job as a waitress, offering plenty of opportunity for mishaps in the restaurant. Meanwhile, The City Guy and The Confederate Girl are left to think about what they have done in conning Tillie. Their remorse does not last long when a twist of fate turns Tillie into an heiress and The City Guy quickly arranges their reunion. Throw in a party at a mansion and epic chase with a full complement of Keystone Cops on foot, in cars, and in boats and the plot has all the makings of what was billed as The World’s Outstanding Comedians in the Funniest Comedy of All Time.

Chaplin gives a fine performance in the film demonstrating a full range of physical prowess as a master of slapstick, but its Marie Dressler who provides a tour de force performance as Tillie. Dressler pulls out all the stops as a physical comedian able to throw a punch, take a fall, stumble and fumble, give chase and wreak havoc. She brilliantly executes all the elements of slapstick in a character you can’t help but like as the wronged heroine of the story. She gives a hilarious dance performance at the mansion party that truly illustrates how this film is the next-level of slapstick comedy.

Watching a sketch in Caught in a Cabaret, a short story in His Trysting Place, and a full-length feature in Tillie’s Punctured Romance, is to experience the evolution of slapstick in a single year. It’s an entertainingly funny journey well worth taking.